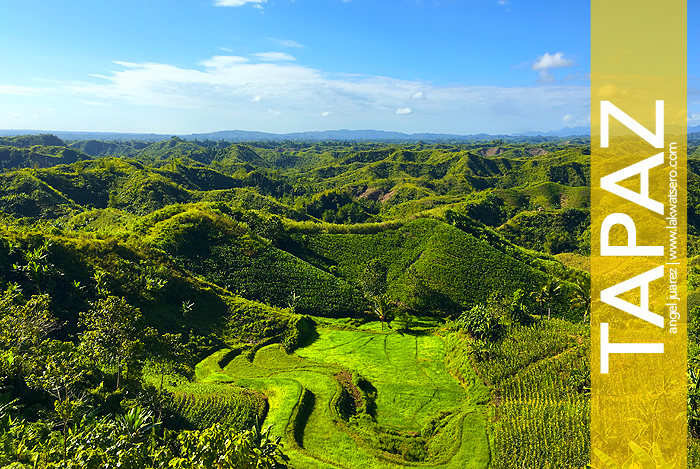 In the highlands of the Province of Capiz lies the town of Tapaz, a rural and laid back town, perhaps the farthest in all municipality of the province.

At least two-hour ride from Roxas City or Iloilo City, Tapaz is generally raw and remote. Its remoteness makes it unpopular destination for tourists, not knowing that the town offers a panoramic view of the highland of Northern Panay, possibly the most beautiful vantage point of the scene. The view of the rolling hills and corn fields of Tapaz with the mountain range of Antique and Iloilo on the far background as seen from Barangay Artuz is beyond words.

Aside from the breathtaking view, Barangay Artuz prides itself of another majestic attraction – Pangilatan Falls!

Situted in Sitio Agmalasogi, Pangilatan Falls is a series of waterfalls with its main cascade dropping to a height of approximately 30 feet into a deep natural basin. The Provincial Government of Capiz once claimed that it is the most beautiful waterfalls in Panay that they developed the place into an eco-park, the trail was cleared and cottages were built. But Super Typhoon Yolanda changed the course of this once popular natural tourist attraction.

Perhaps, its claim as Panay’s most beautiful waterfalls was true at some point in the past, most probably during pre-Yolanda days. Today however, it is in sad state of neglect… its glory days seem forgotten. The cottages that once stood atop the falls were all destroyed by the typhoon and never rebuilt. The once defined trail is now outgrown by crops and plants. The turquoise clear water that once flowing on the river and cascading on the waterfalls is now dark and dirty, the upper basins that were once enjoyed by humans are now enjoyed by water buffalos. Sadly, Pangilatan Falls has lost its once claimed beauty. Nevertheless, not all its magic is lost for it still holds its grandeur… there’s still a promise of better days.

There’s no easy and cheap way of going to Pangilatan Falls, Barangay Artuz is approximately 15 kilometers from Tapaz Poblacion with majority of the road in bad condition, as if untouched by development. But the breathtaking view en route to this falls is already worthy of the overheads.

How to Get to Pangilatan Falls

To go here, catch a single motorcycle at the Poblacion to take you to Artuz, regular fare is P50 one-way per passenger, you may need to pay the maximum of two if you are alone. You may ask the driver to stop for a photo of the beautiful highland scenery. When you reach Artuz, you may either trek for approximately two kilometers or find another motorcycle to take you to there for whatever amount you can afford. I paid P100 round trip and the driver served as my guide. The road is terrible though, it was actually one of the few moments that I got afraid of the ride. Since the old trail is already covered with crops and plants, the approach is from the top going down the slippery wall with only the tree roots as support. Going back to Tapaz, there are single motorcycle from Artuz that travel to the Poblacion, fare is P50 per passenger.